There has been so much discussion on the VMware Communities about the VCP5-DCV Delta Recertification Exam.

I think everyone has forgotten that the Delta exam is not your only option to re-certify your VCP5-DV.

You have four options to re-certify you VCP5-DV :

You can check VMwares re-certification policy for all the official details.

I decided to learn something new and take a VCP exam in a different track – VCP-NV.  So last week I took and passed the VCP-NV exam. 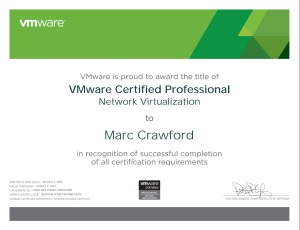 Now my VCP5-DV expiration date has been extended –

Don’t waste your time with the Delta exam.  Push yourself to learn something new and take a VCP in a different track or take a VCAP exam!

"Do what you have learned and received and heard from me, and seen in me, and the God of peace will be with you." - Philippians 4:9

a resource to equip churches and men

Your P.I. on virtualization

The weblog of an IT pro specializing in virtualization, storage, and servers

My ramblings about all things technical