It’s that time of year again. The 2017 St Louis VMUG USERCON is just around the corner.  We are excited with the team at VMUG HQ that we worked with us to make this event happen.

Lots of reasons to attend the event –

If you have not registered yet, there is a contest for those who preregister for a chance to win an $100 Amazon gift card. – Register Here

The USERCON is at at a new location this year – Renaissance St. Louis | 9801 Natural Bridge Road | St. Louis, MO 63134. The event starts at 7:30 am and runs until 5 pm.  The new location should address some of the space issues we had the previous years.

Scott has been working in IT for more than 20 years and is currently an Engineering Architect for VMware. He specializes in the integration of solutions and technologies across differing vendor platforms and is a Microsoft Certified Trainer. Scott is the author of the best-selling book, Mastering vSphere 5.

Keith is an IT Architect with 18 years of experience helping organizations achieve their mission through optimized IT infrastructures. Keith has written for several award-winning properties that include TechTarget.com and TechRepublic.com.

The agenda is live and there are a lot of technical sessions that are not just marketing fluff.  VMUG and VMware takes attendee feedback from previous events to make sure the content that is being presented is what attendees are asking for,

This year the St Louis VMUG leaders decided to give back to the local community.  We are asking attendees to bring non perishable food items.  Attendees that bring a non perishable food item will receive a ticket and a chance to win a 4K Roku.  All food will be donated to the Collinsville Il Food Pantry.  A list of food they are in need of is on their website.

The event does not happen without great support from vendors.  Here is not final list of some of the vendors that will be at the event.  Please be sure to thank them for their support. 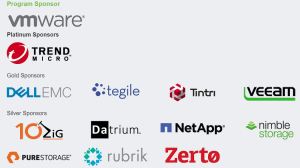 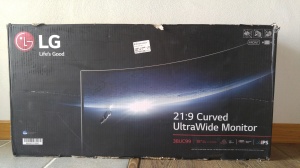 3rd Prize is a HOME LAB!

We are excited for the event this year and can’t wait to see everyone!  Don’t forget to register!

I had the honor of attending the VMUG Leader summit on Dec 2 – 4th.  The summit was held at VMware HQ in Palo Alto.  There were 91 local VMUG leaders that attended the event.  Having so many VMUG leaders in one location was very valuable. I want to thank VMware VMUG HQ staff for coordinating the event and thank VMware for hosting this awesome event.

The purpose of the summit was to share ideas and learn additional methods to enhancing local VMUG’s.

There was a jam packed schedule of events.  I arrived Wednesday and there was a reception that evening.  It gave all the leaders a great opportunity to hang out and meet other leaders.

On Thurs we had a jam packed day.  To start off the General Session Brad Tompkins (VMUG CEO) welcomed everyone and let us know what was going to happen that day. He also announced that VMUG will have a European office starting in 2016.  Next Mariano Maluf (VMUG Board President) talked about what was going on with the VMUG organization.  Last, Guido Appenzeller (CTSO for NSXBU at VMware) gave a presentation on NSX.

Next we were broken up into groups and attended different breakout sessions.  There were four different sessions that we attended throughout the day :

These sessions were designed to give us the tools and information to better run our local VMUG’s.  These sessions also initiated a lot of discussion about what worked and what was not working at each leaders local groups.  It was great to hear other leaders share their experiences.

After two of the breakouts we had lunch and then Kit Colbert (VP & CTO of Cloud Native Apps at VMware) gave the afternoon keynote on Software Defined Everything.  It was really focused around DevOps.  Kit is a great speaker and did a great job presenting.

Surprisingly it was raining off & on Thursday, but we were given a tour of the Vmware campus after the UserCon session.  The VMware campus is huge and very beautiful.  VMware is a very green company, so everything was designed with that thought in mind.

The campus tour was awesome, but we had one more breakout session to attend.  After that breakout session we walked across the VMware campus for a “VMware Demo Showcase”.  VMware engineers from different product groups had demos setup for us to watch and ask questions.  About half way through the Demo Showcase we had a huge surprise.  Pat Gelsinger stopped by with one of his good friends Michael Dell.  Michael talked for a few minutes and then him and Pat had to leave.  It was a highlight of the day for me.

The Demo Showcase was great, but it was late in the day and I was tired, so after we went back to the hotel, I did not stay at the reception for very long.  There was a lot of food and drinks.

Friday was only scheduled for half a day.  We had a great breakfast that morning – lots of BACON!  The morning was kicked off with a panel discussion from four VMUG leaders about what they had learned from the summit.  I was honored to have been asked to be on the panel. 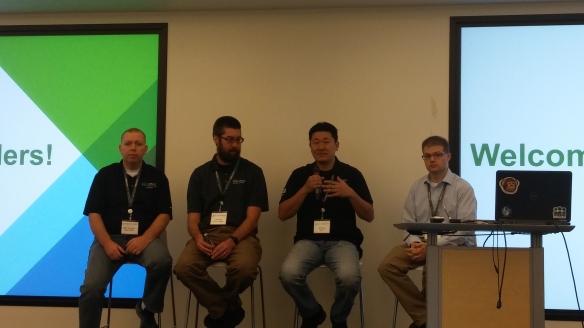 Pat Gelsiner returned Friday for the last General session.  He spoke about different VMware topics and then answered some questions from different leaders.

The last keynote for the summit was presented by  Dr Don McMillian on  “Effective Communication in the Information Age”.  I did not realize Dr McMillian was a comedian.  I do not remember the last time I laughed that hard.  He is extremely funny and if you ever have the opportunity to see him you will not be disappointed. .  You can check out some of his work at his website – http://www.technicallyfunny.com/

Robin Matlock (CMO at Vmware) stopped by and spoke briefly about some marketing initives going on at VMware and then answered a few questions.

Brad Tompkins closed the summit by inspiring all the leaders to take what we learned and apply it to our local groups.

Overall, I thought the VMUG Leader Summit was a huge success.  I learned a lot from all the sessions and I learned even more from all the discussions going on between different leaders.

Check out all the  Pictures from my VMUG Leader Summit trip. 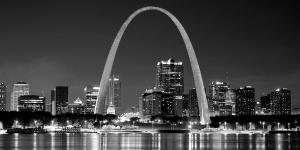 The 3rd annual St Louis VMUG User Conference is a week away.  There are many changes this year and new things added to entice you to attend this year.

The big change this year is that the conference will be in downtown St Louis at the Hyatt Regency St. Louis at The Arch.

Attend educational sessions from VMware and partners on topics including:

There will be 3 sessions on the recently announced vSphere 6.  Check out the agenda to see a list of all the sessions.

This year we are trying to set the bar high and do something really awesome for our members to help develop their skill set and advance their career goals.

As such, we’re ponying up the cash for the ultimate grand prize: an entire home lab kit comprising of :

After the conference the reception party is going to be at the Hyatt Regency Gateway Terrace.  It is on the roof top of the same building that the conference is in.  Free food and drinks will be provided.  This will be the perfect  place to network with fellow VMware administrators, users, employees, and partners

Even if you can’t stay all day, there are many reasons to register and stop by.  So don’t forget to register.

Yesterday I received word that both keynote speakers for the 2015 St Louis VMUG User Conference have been confirmed.  Both speakers are vExperts and rock-stars in the virtualization world.

One of the speakers is Kendrick Coleman.  He works for VCE, has presented at VMworld and is a contributing author to VMware vSphere Design, 2nd Edition.  You can check out his website www.kendrickcoleman.com/ to see more information about Kendrick.

The second speaker is Chris Wahl.  Chris is a senior solutions architect for AHEAD and VCDX # 104.  He is one of the authors of Networking for VMware Administrators.  He has also published many courses at Pluralsight and presented at VMworld many times.  Check out his website www.wahlnetwork.com to see more information about Chris.

At VMworld 2014 I attended the VMUG Leader luncheon and was told that the program was going to be released soon.  With the amount of time that has past since VMworld, I did not think it was going to happen this year.

VMware finally listened to it’s users and released something similar through the VMUG Advantage program.

VMware’s EVALExperience gives you exclusive access to nine VMware applications to test for 365 days. EVALExperience provides all of the tools you need to stay in the game and take your career to the next level, all in one place!

Head over to the official EVALExperience website to see all the details.

Lab users rejoice because we will finally be able to evaluate software in there labs for a full 365 days!

Now if Microsoft would just bring back the TechNet subscription.

"Do what you have learned and received and heard from me, and seen in me, and the God of peace will be with you." - Philippians 4:9

a resource to equip churches and men

Your P.I. on virtualization

The weblog of an IT pro specializing in virtualization, storage, and servers

My ramblings about all things technical